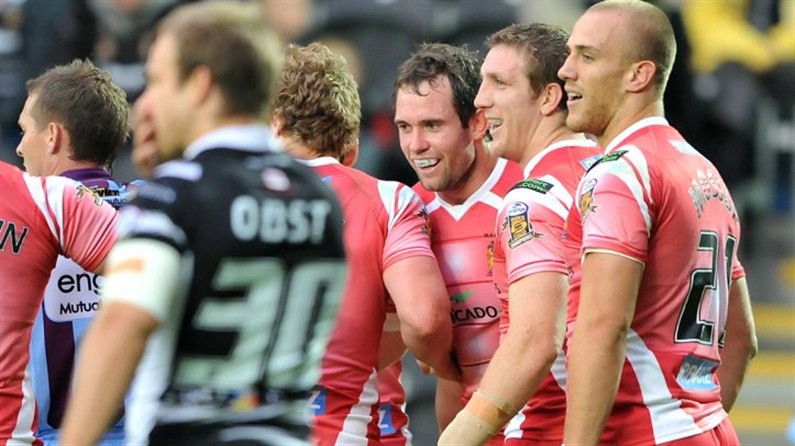 Result from the KC Stadium

Wigan came away with a hard fought 16-30 win over Hull FC at the KC Stadium on Friday night.

The Warriors completing a Super League double over the black and whites, a brace from both Sam Tomkins who again proved his excellent quality and Pat Richards, George Carmont with the other Wigan try.

Wigan came from 6-0 down to lead 22-6 before a try either side of half time from the home side got Hull back within six points before a Richards penalty and a superb Sam Tomkins scoot sealed the win.

Hull were without Joe Westerman who failed a late fitness test and Wigan rested Harrison Hansen, Liam Farrell his replacement while Paul Prescott missed out with a slight hamstring injury.

It was Hull that got off to a flying start, Joel Tomkins penalised for a high tackle and the home side got themselves into a good position up field. The ball was swung out to the left for Kirk Yeaman to dive over in the corner. Danny Tickle struck the extras to make it 6-0.

Wigan drew level on 12 minutes with a great try, first a Deacon kick through and Charnley quick to gather and then a Finch chip kick was taken by Sam Tomkins through at pace and the full back did superb to twist to stretch over for the four points. Richards added the goal, 6 all.

On 17 minutes, the Warriors came close to their second try, an excellent round the corner pass by Finch looked to set up Richards but the winger knocked on close to the Hull line.

Soon after Hull were denied by the video referee Steve Ganson, Obst over for the try, obstruction by Lauaki on Hoffman.

On 26 minutes a wayward pass by Danny Tickle was intercepted by Pat Richards who raced the length of the field for the Warriors second try of the game. This time Richards missed the conversion, 6-10.

Three minutes later and Wigan were in again, a Sam Tomkins kick bounced favourably into the hands of George Carmont for his eleventh try of the season, Richards this time struck the goal, 6-16.

On 32 Wigan were gifted a try, a Turner pass into no man's land close to the Hull line and Finch supplied the inside pass to Richards for an easy touchdown. Richards goal made it 6-22.

Within quick succession Wigan lost both Sam Tomkins and Paul Deacon, thankfully both were able to return later in the game.

As the hooter sounded Hull got themselves a lifeline, Wigan penalised three times in quick succession, a Horne kick and Turner touching down. Tickle missed a relatively easy goal, 10-22 at the break.

Hull grabbed the first try after the interval on 49 minutes, Manu crashing over after a spell of pressure, Carmont penalised for off side, Tickle hit the goal from under the sticks, 16-22.

On 57 minutes, Richards hit a penalty to open up an eight point advantage.

Wigan ensured the win on 73 minutes with another brilliant Sam Tomkins try, a quick play the ball and Tomkins raced away to score the touchdown, he spotted a gap and left the Hull defence standing. Richards goal made it 16-30 and game over.

It was real contest and Wigan showed some real resilience against what proved a determined Hull side.