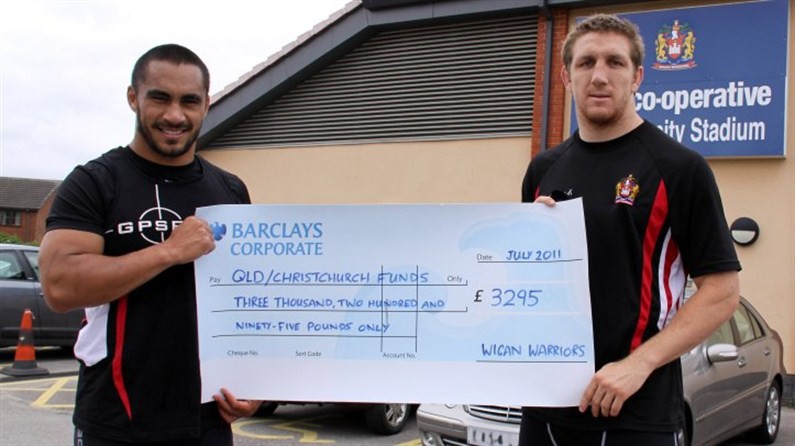 Wigan Warriors are delighted to announce the E-bay auction sale of Players World Club Challenge Shirts has raised a total of £3295 with the proceeds split between the Queensland Flood Appeal and the Christchurch Earthquake victims.

The Wigan players kindly donated their match worn shirts from the game against NRL Champions St George Illawarra back in February to the Club for auction between these two very worthwhile charities.

The shirts have been put on the Club's Official E-Bay site over the past few months and the response from Wigan and indeed Rugby League fans has been outstanding. England Full Back Sam Tomkins shirt raised the most money and was auctioned for £450.

"Every player saw the TV footage of the floods back home and then the dreadful earthquake in New Zealand and we wanted to do something to help the victims. It has been fantastic to see so much money raised by the auctioning of these shirts. It will take a long time for the people of these two disasters to get their lives fully back on track and we are pleased to have helped if only in a small way with the auctioning of these one off shirts."

Pictured with a cheque at the Warriors Training Ground, the Co-operative Community Stadium are Warriors Australian second row forward Ryan Hoffman and Warriors Kiwi scrum half/hooker Thomas Leuluai with the cheque for the monies raised. $2492 Australian Dollars will be sent to the Queensland Flood Victims and $3127 New Zealand Dollars will be sent to the Christchurch Earthquake victims.