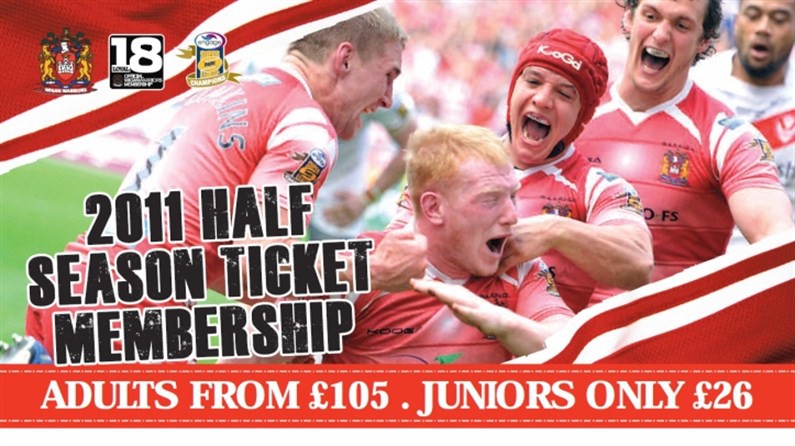 Wigan Warriors are delighted to unveil details of their 2011 Half Season Ticket Membership packages which have been revitalised and offer supporters more choice and better value than ever before. This year, family half season tickets are available whilst fans can split the cost of supporting the team with the mini-Direct Debit Scheme.

The package includes an Ancient and Loyal Membership package (including a Warriors handbook, car sticker and keyring) for the first 100 purchasers, plus tickets the BIG ONE 3 when Wigan take on Huddersfield Giants. The package also includes the hugely important games against Leeds Rhinos, Wakefield Wildcats, Salford City Reds, Bradford Bulls and the season finale as Wigan host Crusaders.

"We have some fantastic games coming up as we move towards the business end of the season, including some huge clashes against the likes of Huddersfield and Leeds"

"Season tickets offer great savings over match by match admission but they are only available until the 24th June, so any fans wishing to get theirs need to act quickly!"

Fans that have already purchased tickets to any of these games need not worry, simply tell the Ticket Office upon application and they will deduct the cost of that ticket from the half season ticket price.

In addition to some fantastic savings - families can save over £50 whilst adults start at just £105 and juniors only £26 - supporters can receive numerous benefits including priority on cup, playoff and final tickets (where appropriate) as well as free entry into the South Stand Supporters Lounge (subject to availability) and the ability to exchange their season ticket for a match ticket if they can't attend a game (terms, conditions & limitations apply).

Half season tickets are now available from the DW Stadium Ticket Office and by phoning the Ticket Hotline on 0871 66-33-552 from Monday, whilst more information is available by [clicking here].