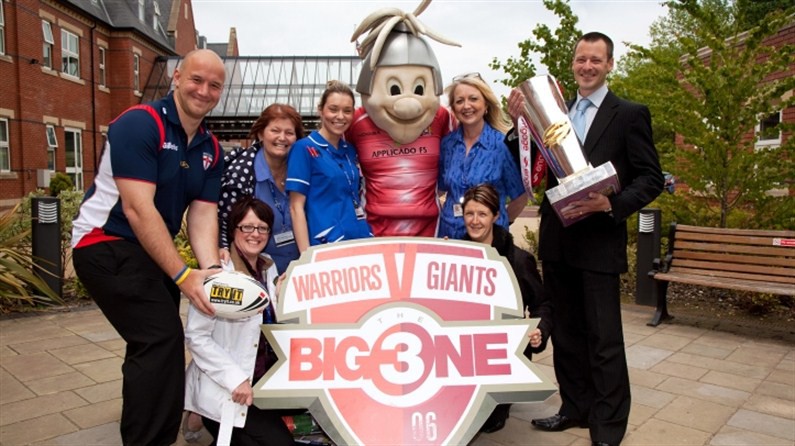 Staff at Wigan's Royal Albert Edward Infirmary got the opportunity to have their photograph's taken with the Super League trophy this week. Mighty Max, the mascot of the 2010 Super League Champions, Wigan Warriors, visited the hospital with the silverware.

The visit was to promote the Get in Touch Rugby Festival which was launched this month.

The Festival kicked off on 16 May, with staff, friends and family all trying out new skills, and learning the game of Touch Rugby. The Festival, which is being run by Wigan Warriors and Wigan Warriors Community Foundation, will see doctors, nurses and admin staff battle it out against their own workmates, as well as teams from the community.

Mike Watson, Wigan Warriors Community Foundation Manager, said, "The Wigan Warriors and the Warriors Foundation are delighted to be partnering with WWL and The RFL in yet another programme designed to get more people in the borough active. Our focus on the health of our communities is growing almost daily, and Touch Rugby is a great way for people to start to lead a healthier lifestyle. Even if you haven't ever played before, you can come along on your own or as a team and get involved."

WWL staff are also privileged to receive some tickets for the upcoming Big One THREE game between Wigan Warriors and Huddersfield Giants. The fixture has a 5.45pm kick off, scheduled for 25 June. The club are expecting a large turnout, with over 20,000 fans, and WWL staff will be part of the big game, by cheering the Champions on.

The Festival is open to all, over the age of 16 and is free. If you would like more information on the Get in Touch Rugby Festival please contact Clare Northall on 01942 82 2590 or clare.northall@wwl.nhs.uk.

Tickets for the Big One 3 - Wigan Warriors versus Huddersfield GIants are no on sale from the DW Stadium Ticket Office, Ticket Hotline on 0871 66-33-552 and online by [clicking here].