Catalans Charity Shirts Up For Auction 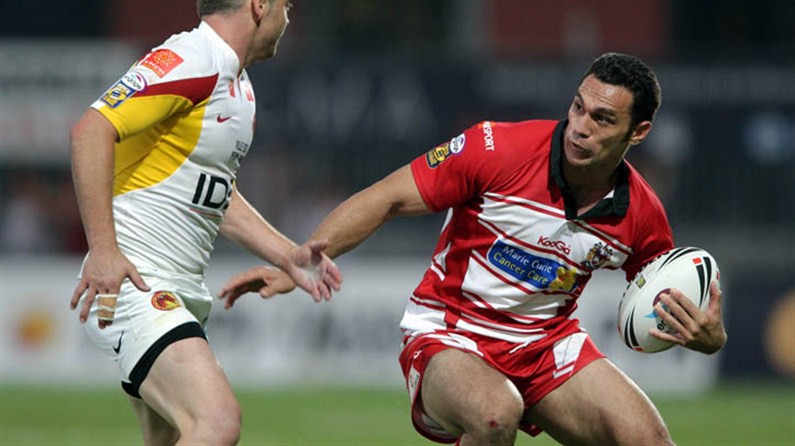 The match worn shirts from the away fixture at Catalans Dragons are now available for fans to start to bid for on our official Warriors World e-bay site with all proceeds to Marie Curie Cancer. We start with the shirts of Thomas Leuluai, Darrell Goulding and Chris Tuson, more shirts will go online over the next few days. The auction time for these shirts is 10 days.

Due to gaming and advertisement laws in France Mecca Bingo this year nominated Marie Curie Cancer to replace their name on the front logo of the shirt for the game that was played in France on the 4th July 2010 and decided the charity would benefit from the proceeds of the auctioning the shirts.

Richard Jaques, sponsorship manager from meccabingo.com said, "Marie Curie Cancer Cancer is our charity partner for 2010 and we want to do what we can to raise awareness of the work of Marie Curie Nurses and to also raise funds. Hopefully people will dig deep to own one of these exclusive one-off shirts and raise much-needed money for Marie Curie Cancer Care at the same time."

Meccabingo.com team members and customers are helping to raise £200,000 for Marie Curie Cancer Care throughout 2010, which would fund 10,000 hours of home nursing care

For more details of the charity and the work they do see www.mariecurie.org.uk

The players shirts have been washed and are signed by the individual player on the back by their squad number as well as on the top right near the sponsor's name. The one off shirts were specially produced for the game with the Shirt Sponsor meccabingo.com replaced by the Marie Curie Cancer Care logo and name.

All shirts have a reserve price of £50.

To see the shirts and start bidding from now at http://myworld.ebay.co.uk/warriors-world