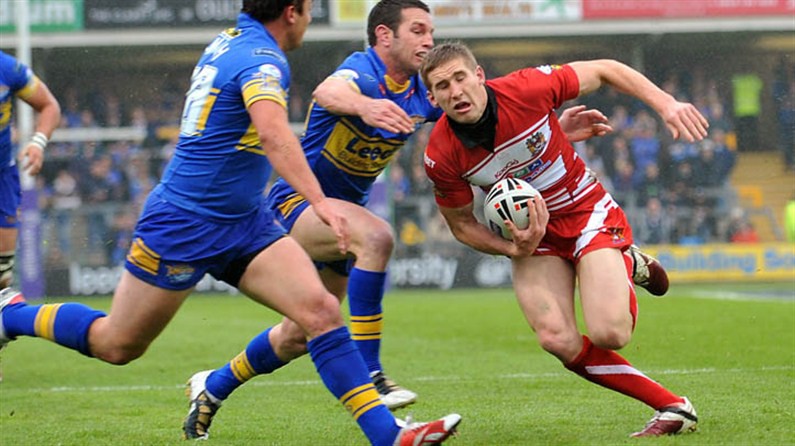 Wigan edged closer to the League Leaders Shield with a well earned 12-26 victory at fourth placed Leeds on Friday night.

The Warriors under the guidance again of Shaun Wane showed their top credentials and fully deserved the two Super League points.

Tries from Thomas Leuluai, George Carmont, Harrison Hansen and Martin Gleeson with three goals and two penalties from Pat Richards saw the Warriors home. The win was Warriors 11 from 12 in 2010 on the road.

Wigan made one change from the side that defeated Hull FC on the road last week with Ben Davies replacing Paul Prescott on the bench, Prescott ruled out with a slight facial injury. The Wigan players wearing black arm bands, in respect ,following the death this week of the Father of Head Coach Michael Maguire who is back in Australia for compassionate reasons. The Rhinos welcomed back scrum half Rob Burrow for the first time in three weeks, Burrow starting also on the bench.

Leeds kicked off and Kevin Sinfield failed to go the mandatory 10 metres, the home side were immediately penalised for off side, Wigan went for the try rather than two points, unfortunately Andy Coley knocked on early in the attack and the chance had gone for the cherry and whites.

Wigan took the lead on 8 minutes with a fantastic try, a break on the right, Gleeson to Goulding and the winger did well to kick the ball infield as the cover defence came across and Thomas Leuluai was on hand to dive over for the games first try. Richards added the goal, 0-6.

Leeds were fortunate to keep 13 men on the field on 15 minutes, a late high challenge from Carl Ablett on Sam Tomkins was only penalised and put on report, it could have been a yellow or red, thankfully the Warriors full back was quickly back on his feet.

On 23, Ryan Bailey was also put on report by Steve Ganson, the prop raising his knee running into George Carmont.

Wigan extended their lead on 27 minutes, the visitors got six more tackles as Buderus played at the ball. Wigan swung the ball left, Sam Tomkins to George Carmont who did well under pressure to turn and twist his way over for his first ever try at Headingley. Richards added the extras, 0-12.

Leeds grabbed a try on the stroke of half time, Wigan penalised a couple of times in quick succession, the last for a high tackle, Webb and Sinfield combining and Chris Clarkson found his way through a gap. Sinfield got the goal, 6-12 and game on. That was the first try the Warriors had conceded in over 2 hours of rugby.

Three minutes in the second half, Andy Coley was sent to the sin bin, harsh, the referee looking to reduce the penalties. With Wigan down to 12, on 47 minutes, Sam Tomkins had the ball dislodged from him by a Burrow tackle and Keith Senior got Leeds second try of the evening. Sinfield grabbed the conversion, 12 all.

On 52, Wigan were awarded a penalty, Ablett penalised for holding onto Sam Tomkins, Richards struck the penalty, 12-14.

Ten minutes later and Wigan seized the initiative with a great try from Harrison Hansen who showed pace and power to race through for the Warriors third try of the evening. The second row had lots to do sporting a scrum cap after needing stitches in an earlier head wound. Richards hit the extras, 12-20.

With 11 minutes Wigan had it won through Martin Gleeson's 9th try of the season, the centre straight from acting half back going into the right hand corner after an O'Loughlin pass to Goulding had stretched the Rhinos. Richards missed the goal this time, 12-24.

Leeds were denied a try for a knock on from Ryan Hall with six minutes left . Richrds added a late penalty to make it 12-26.

So a great win for Wigan on the road and some revenge for the Challenge Cup loss at Headingley a little earlier in the season.