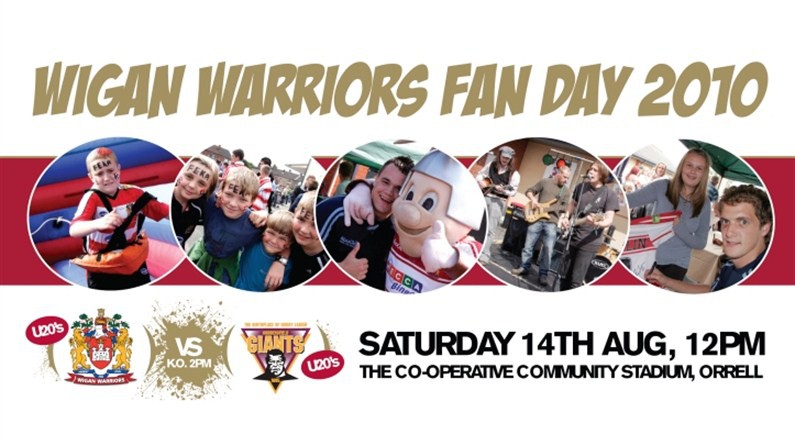 Wigan Warriors can today announce that the 2010 Fan Day will take place at The Co-operative Community Stadium, Orrell on Saturday 14th August.

The eagerly-anticipated event will kick off at 12 noon where the entire first team squad will be in attendance to meet supporters, while there will be a wide range of activities for all the family including Rugby League inflatable's, live music, a mini fun fair, skills sessions for budding junior rugby players, live music, food and drink and much much more for Warriors fans to enjoy.

The day will also feature the Warriors Under 20's game in the Valvoline Cup against Huddersfield Giants which will kick off at 2.00pm.

"Following the success of last years Fan Day, which was enjoyed by players and fans alike, we have arranged the 2010 event for Saturday 14th August. It will be a day full of family events with a chance to watch the Under 20's in action at the same time. It is a great chance for the fans to meet the players and there will be plenty to do for supporters of all ages."

Tickets are now available by way of a donation to the Wigan Warriors Community Foundation. These are £4 for adult or £2 for children. The Foundation (charity number 1129008) has been established to support grassroots Rugby League across Wigan and the surrounding area.

Tickets for the event are now on sale via the DW Stadium Ticket Office, online at Warriors E-Tickets and by calling 0871 66-33-552.