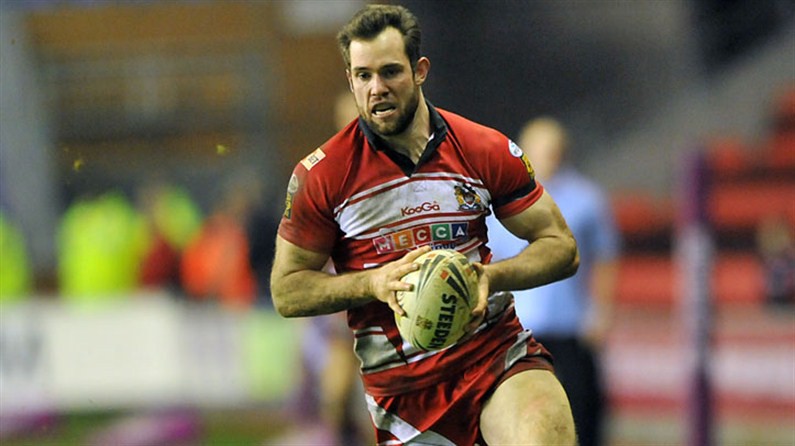 Wigan Warriors completed a Super League double over Hull FC with a convincing 0-46 win at the KC Stadium on Friday night.

Under the guidance of Shaun Wane with Michael Maguire away on compassionate leave, the cherry and whites were just too strong for the Airlie Birds.

Wigan ran in eight tries with a hat-trick for Pat Richards and Sam Tomins and Liam Farrell and Darrell Goulding also crossed. The Warriors were 0-22 up at the break and continued their dominance in the second forty.

The Warriors showed great character to bounce back after the disappointment of the loss at home to Warrington last week to sweep past Hull who had previously won seven of their nine home games this term. It was Wigan's best win at Hull in the Super League era.

Wigan welcomed back Andy Coley to the side after his two game suspension, elsewhere Sam Tomkins reverted to full back with Pat Richards switching to the wing. Paul Deacon moved up off the bench to partner Thomas Leuluai at half back. With Lee Mossop not fully fit, Iafeta Paleaaesina was recalled on the bench.

After conceding a couple of penalties early on, Wigan settled well and came up with two tries in quick succession.

Wigan took the lead on 11 minutes, a superb kick out wide from Paul Deacon into the hands of Pat Richards who gathered the ball to cross for his 23rd try of the season and his 100th in British Rugby League. Richards himself added a superb goal to make it 0-6.

Within two minutes and Wigan were in again, quick hands to the left and great support play from Carmont and Richards sent in Liam Farrell who spun his way over. Richards struck the goal, 0-12.

On 19, Hull forced Wigan into a goal line drop out and were looking to apply some pressure but Craig Hall knocked on straight from the kick. The home side kept pressing and forced another drop out on 24 minutes as Sam Tomkins was called upon to defend from a Berrigan kick. The cherry and whites held firm

On 33 a long O'Loughlin pass on the final tackle opened up Hull again from left to right and Darrell Goulding crossed for the Warriors third try of the night. The home fans not happy suggesting a forward pass. This time Richards missed the extras, 0-16.

Within a couple of minutes Wigan were in again, a high Sam Tomkins kick was taken by Richards ahead of Jordan Turner and passed inside for Sam Tomkins to score. This time Richards hit the goal and the visitors comfortable at 0-22 at the break.

Hull needed the first try of the second half to make a game of it but it was Wigan with just three minutes gone and Sam Tomkins with his second. Great work by Richards with a kick infield and the full back was on hand to touchdown. Richards struck the extras, 0-28.

Wigan lost the services of Goulding following a high tackle, the winger taken off as a precaution.

On 53 minutes, Richards grabbed his second try, an error by Tansey allowed the drop out. Good work by Hansen sent the winger in. Richards goal made it 0-34.

The visitors were on a role, good work by Sam Tomkins with a jink and pass sent Liam Farrell in for his second try. Richards goal, 0-40 and the home fans making their way to the exits with 15 minutes left.

Richards grabbed his hat-trick from a superb Deacon pass and added the goal, 0-46, and 26 individual points for the winger.

A fantastic win for Wigan on the road, a game they bossed from start to finish with a great team display, the icing on the cake keeping the home side scoreless.