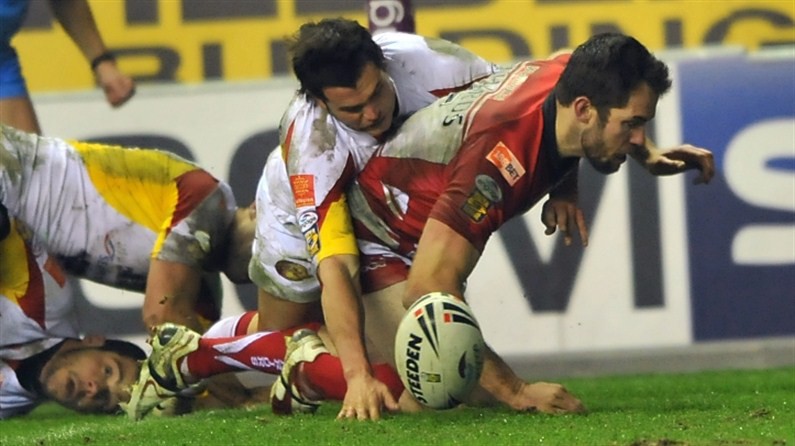 Wigan maintained their 100% start to engage Super League XV with a convincing 58-0 win over the Catalans Dragons at the DW Stadium on Friday night.

The Warriors ran in ten tries with five for Pat Richards and nine goals, a total of 38 points for the winger.The individual tally the best in Super League for the cherry and whites. The other scorers were Carmont twice, O'Loughlin, Leuluai and Goulding.

The home side led 36-0 at the interval and as a contest it just about over.

Wigan simply blew the Dragons away and exposed them particularly on the right flank as Richards ran riot.

The Dragons did at least show a little resilience after the break for a short while but with no points from four games it could be a long season for the French outfit on this showing.

The Warriors were without Harrison Hansen who picked up a shoulder injury last week in the win at Warrington while Mark Riddell returned to the side after missing that game with an ankle injury. Eamon O’Carroll replaced Iafeta Paleaaesina on the bench. Wigan were Captained by Thomas Leuluai.

The Dragons were without the suspended Oliver Elima.

The Warriors took the lead with their first real attack on 8 minutes, Carmont sending Richards over out wide which the winger coolly converted to make it 6-0, Clint Greenshields had given Wigan the position with a knock on at the play the ball.

On 14 minutes, Wigan were in again this time Roberts coming into the line from full back to send a long pass out to Richards who strolled over for the home side’s second try. Again Richards hit the extras, 12-0.

Richards completed his hat-trick on 19 minutes, three in 11 minutes going over from a Carmont pass as the Dragons were again exposed on their right hand side. The winger also had his kicking boots on and made it three from three, 18-0.

The cherry and whites were on a roll and a clever inside grubber kick by Sam Tomkins sent Sean O’Loughlin diving over to touchdown for Wigan’s fourth try with just 25 minutes on the clock. From under the posts Richards struck the conversion, 24-0.

Within three minutes it was a try, this time on the right, O’Loughlin feeding Darrell Goulding who crossed in the corner. Richards simply couldn’t miss 30-0 in 30 minutes.

With a couple minutes of the half left Richards grabbed his fourth try of the night, Sam Tomkins with a kick out wide and again the Dragons defence was nowhere to be seen. Richards goal made it 36-0 which it stayed until the interval.

It took 17 minutes of the second half for Wigan to score again, Leuluai crashing over from close range, Richards goal made it 42-0.

Three minutes later and Carmont grabbed the Warriors eighth try as again the Dragons simply opened up. Richards continued his great kicking record on the night to make it eight from eight, 48-0.

With nine minutes of the game left George Carmont was handed his second try of the night, the Centre intercepting a Greenshields pass to race away from inside his own half. Richards was spot on again, 54-0.

On 74 Richards got his fifth try of the game, this time Bailey with the pass to send the winger away. This time he missed the goal, 58-0.

So Wigan go from strength to strength, what was also pleasing was keeping the Catalans at bay.