Two tries from Liam Farrell and Joe Burgess’ 100th for the Club helped Wigan Warriors to a 36-18 victory over Hull Kingston Rovers in the Betfred Super League on Friday night.

Adrian Lam’s side were pinned back twice before the break to see the teams head into the sheds level at 12-12. However, a rampant Cherry and White outfit returned for the second half and proved too much for Tony Smith’s men.

George Williams, Liam Marshall and Tony Clubb also got on the scoresheet, as the result sees Wigan climb to third in the table, just two points behind second placed Warrington Wolves.

Wigan drew first blood through No.6 Williams in the 5th-minute. A fantastic solo effort saw the stand-off break the KR line 40 metres out with a vicious step. Putting his pace to good use, Williams ran home to score just left of the posts. Zak Hardaker added the extras.

The Robins scored a try of their own through Ryan Shaw in the 10th-minute. Making good use of a penalty conceded by the Warriors on their own 10-metre line, Rovers shipped the ball out to the right edge to see their No.5 score in the corner. Shaw then added the extras, bringing things level at 6-6.

The Warriors regained the lead in the 16th-minute through winger Marshall. A tidy grubber executed by Thomas Leuluai 10-metres out caused a lot of confusion in the KR defence and it was ultimately pounced on by Marshall in the right corner. Hardaker made it two from two with the boot, taking his side’s lead to 12-6.

KR got their second try of the game in the 37th-minute through Ben Crooks. A grubber from Michael Lewis found the centre to touch down. Shaw converted his second kick of the night, bringing the scores all level just before half-time.

Wigan started the second half as they started the first, by scoring the first try of the half. Farrell latched onto a short ball from Sam Powell a couple of metres from the try line to touch down under pressure from two Rovers defenders. Hardaker converted his third of the evening, taking the scores to 18-12.

Just two minutes later, the Robins clawed a try back through Josh Drinkwater. A grubber just 10-metres out from Drinkwater eluded a number of players from both sides in the in-goal area, leaving the KR No.24 to chase his own kick and touch down. Shaw added the extras to make it 18 apiece.

The home side took the lead for the fourth time in the 57th-minute through Burgess. The winger scored his 100th try for the Club, as a typically swift move down the left edge saw Oliver Gildart draw two KR defenders and feed the waiting Burgess, who crossed in the corner. Hardaker converted the kick to put his team 24-18 ahead.

The 61st-minute saw the introduction of Wigan’s latest signing, Bevan French, who replaced try scorer Burgess, in his debut for the Club.

The Warriors extended their lead in the 68th-minute through prop Clubb. A powerful 10-metre carry from Clubb was too much for the Rovers defensive line, and the experienced forward rode a couple of tackles to touch down just to the right of the posts. Hardaker added the two points, taking the scores to 30-18.

Wigan took further advantage of a tiring KR defence, scoring their sixth try of the night through Farrell in the 75th-minute. Collecting the ball 25 metres out, Farrell went on a marauding cross-field run from left to right to score to the right of the uprights and seal the Warriors’ eighth win from their last nine Betfred Super League games. 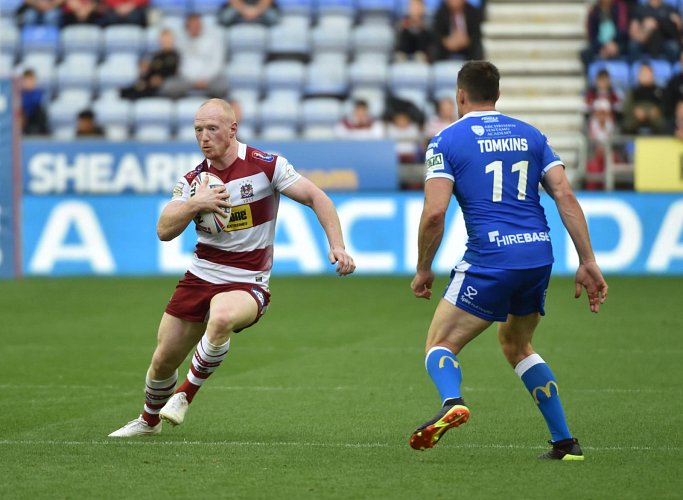 Match action from Wigan Warriors vs Hull KR at the DW Stadium. 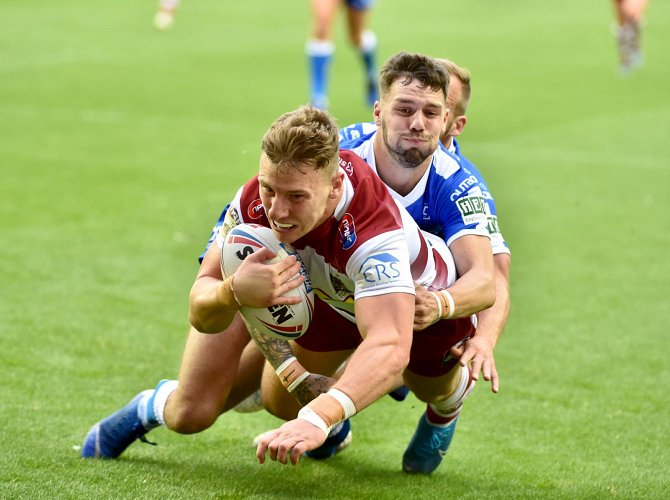 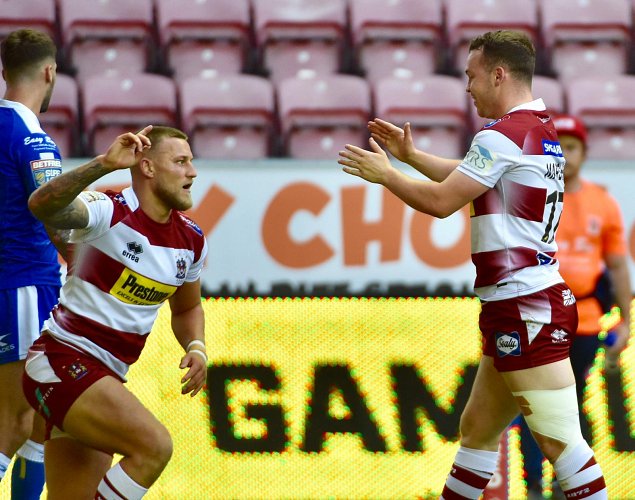 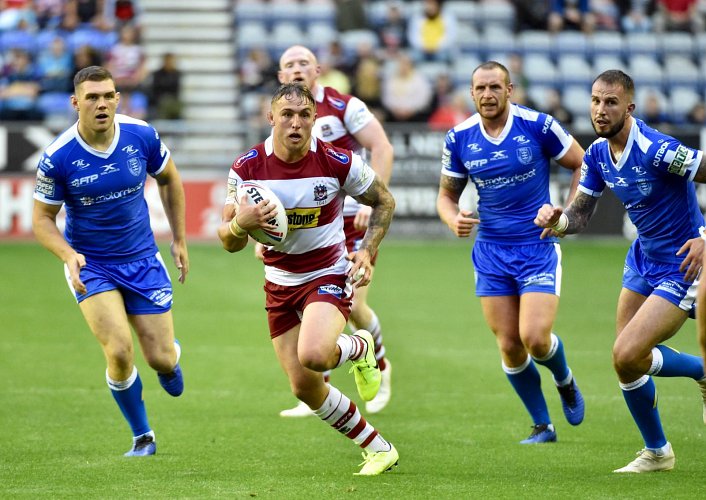 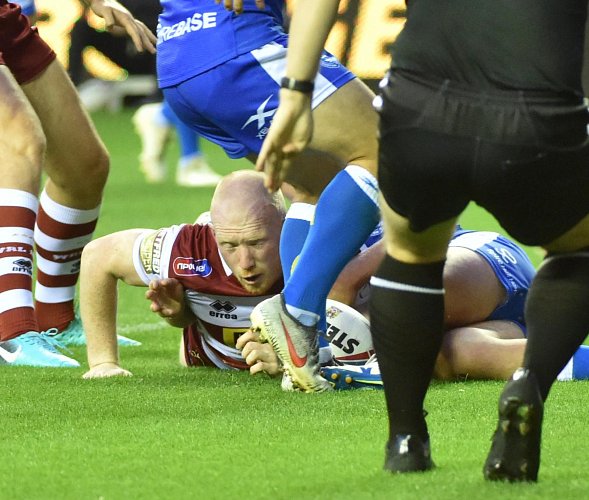 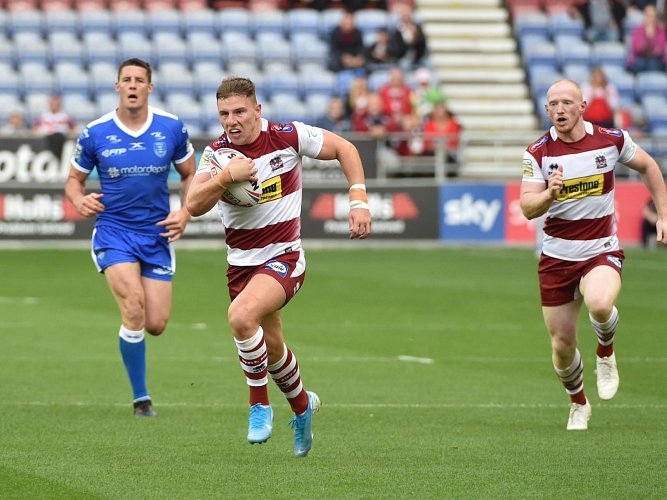 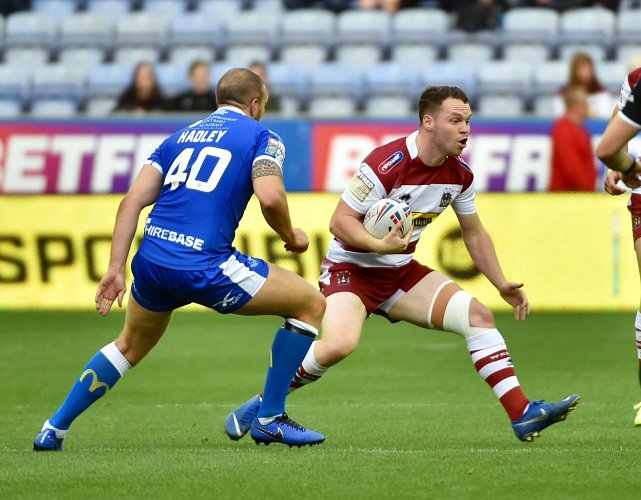